This originally appeared in my newspaper column on December 18, 2014. I thought you might enjoy it, Dear Reader.

In May of 2000 we awaited the birth of our first child.

Many friends and family shared with us in eager expectation–but there were also twenty-four third graders who, too, were very excited about their teacher giving birth.

Due to health issues one day in February of 2000 my doctor told me, “You have to choose between your baby and your teaching.”  I tearfully resigned from teaching the following day even though I’d planned on teaching up until the baby was born.

I still kept in contact with my class and visited them, and they, in turn, wrote me letters.  Some even came to my home to visit me. I promised them that when the baby was born, I would bring the new bundle of joy to school for a visit.  All my third grade boys were hoping for a boy and all my third grade girls were hoping the baby would be a girl.

The girls won, but the girls won too late in the year.  Baby Alissa was due before school was out but arrived a week later.  To this day, our family is continually waiting on her to be ready on time so her late arrival at birth was foreshadowing, to be sure.

So the following August on the first day of school I put my baby girl in her car carrier and drove to the school parking lot.  I cried. I loved my baby, but oh, I missed my third graders. A few weeks later, when the school days had settled into a routine, I brought my little girl to school and asked the teachers if I could stop by each of their rooms so my former students could see the baby and so I could see them.

We fool ourselves in this society and tell ourselves that our public education system can be all things for all children and can “fix” a child’s home life.  That is not true. As much as I loved my students there were many things I simply couldn’t fix. One youngster I knew had really gotten the short end of the stick.  Scabies. Lice on a weekly basis. Dirty. It is a testament to this child’s resilience that he or she did so well academically.

And as I carried my precious newborn from classroom to classroom, the above-mentioned student reached out to touch my baby’s face.  I instantly jerked the baby back towards me and protectively emphasized, “Don’t touch my baby!”

I can still see the hurt in the eyes of that child.  That moment will not go down in history as one of my finest moments.

While this world has done everything it can to pretend that Christmas is not about a baby, the truth is, Christmas is only about the baby and His Heavenly Father’s plan for those on earth to not be separated from Him.

The other day I saw the most ornate and beautiful nativity set I’ve ever seen and I thought, “How unrealistic.”

Baby Jesus, God’s Son, the King of Kings and Lord of Lords was born in a barn.  We like to pretend that Jesus was all nice and neat but the truth is where He was born stunk.  Literally. He was wrapped in swaddling cloths, which is a nice way of saying, He was wrapped in some old rags.

And while we pretend that the Wise Men were present the actual night of Jesus’s birth, they came a bit later. . .when the baby was older.  However, there was one group of visitors who God made sure were there that night. The rag tag bunch of shepherds showed up straight from their place of employment.  They stunk. They were poorly educated. They were rough and edgy; probably not the type of person we would invite into our home, let alone to the birth of our child.

But God had a different philosophy with His baby than I did with mine.

God wanted to make sure everyone knew they could touch His baby.  Jesus was for everyone. Jesus was for the learned and wealthy Wise Men, yet He was also for those who the world considered unlovely like the shepherds.  God made it very clear that people didn’t have to get themselves cleaned up or dressed up to come see His kid. His baby was not intimidating laying in some pristine bassinet with a designer label.  His son was lying in an animal food bowl.

And this Christmas, I give praise to our God, thanking Him that He saw fit to make sure His child was so ordinary that no one, absolutely no one, would have to be intimidated or scared to reach out to Jesus.  And unlike me, God is actually saying, “Please, reach out to my baby!” Merry Christmas, Dear Reader. Go touch His son and live for Him.

Until the next Wednesday the Lord allows. Thank you for recommending or sharing the blog. 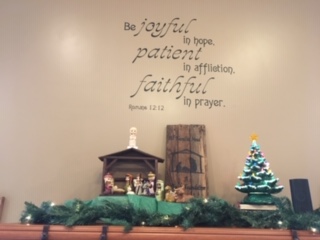